Hello BookWorms! Today I’ll be reviewing the amazing read about a mysterious nawal, a bullied kid, and thrilling Mayan mythology by J.C. Cervantes, The Storm Runner. 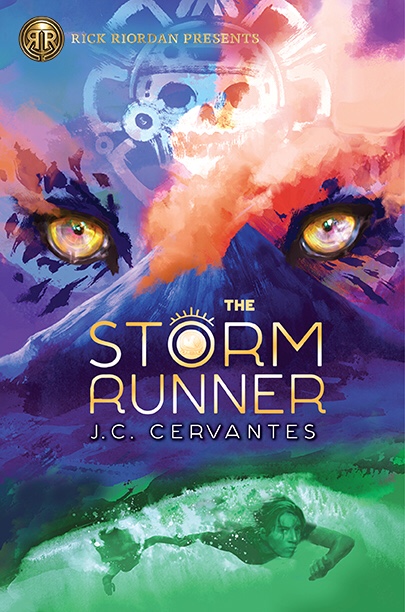 Zane Obispo is a young kid with a limp who lives in New Mexico, he loves exploring the “dormant” volcano in his backyard. Zane quit school because he was bullied for his limp. When his mom gets a letter saying he was accepted into a new school, she looked so happy that, reluctantly, Zane agrees to go. On the first day of school Zane meets a girl called Brooks who is actually a nawal—a shapeshifter. She tells him that he is part of a prophecy that had been around for centuries. The prophecy states that he will free an evil Mayan God from an ancient relic. Zane starts to realize that his volcano isn’t just a normal volcano; it holds the relic that, according to the prophecy, contains the evil god A-Puch. They return to the volcano to try to avoid the prophecy but instead fulfill it. After releasing A-Puch, Zane and Brooks are thrown into the midst of a wild adventure involving demons, the goddess of chocolate, peppers that can paralyze you, and much, much more.

Join Zane as he recounts his adventures in stunning detail with a cliffhanger ending, and a surprising Post-Script. (By the way, “post-script” is the longer way of saying P.S.)

This book is of a similar age range as the previous book I blogged about, Aru Shah and the End of Time (it’s a really good book, go check the post out!), as it was meant for a middle school audience, but with no gore or cursing. There are fight scenes and instances where people get injured, but nothing too serious. (Also, on a side note, a dog may or may not die… So, just a heads up.) For these reasons I’d say around 9-11+.

That’s all for today!

Keep Calm and Read On,

P.S. Happy new year! I wish you all a great year filled with great books!

Hi everyone! My name is Camila and I’m 11 as of September 2018, my goal with this blog is to introduce kids to amazing new books and series, but keeping them age appropriate and at the right reading level so everyone can enjoy awesome books as much as I do! In this blog I will write about my opinion on the book(s) that I read or have read and what age group I think should be reading these books. FYI these are just my ideas, so whatever you think floats your boat, these are just to help you decide! ;) View all posts by Camila